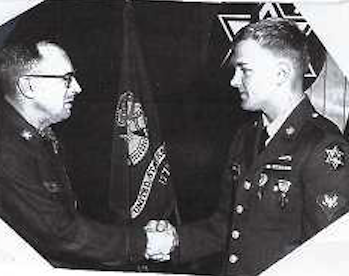 Regular readers of the Clay County Progress will probably recognize the name Gary Chamberlain from letters in our “Your Views” section or maybe from a photo in which he is accepting a check from a local business to help support his anti-litter campaign.

I’ve had the pleasure of meeting Chamberlain a handful of times and quite honestly he became the litter guy to me. His passion to protect the beauty of our area has always been the subject of conversations with him.

However, thanks to a mutual friend, my view of Gary Chamberlain changed last week. The friend sent me a newspaper clipping from Chamberlain’s hometown of Tigard, Ore. The story is about a 21-year-old version of Chamberlain not only receiving a Purple Heart but also a Silver Star for his gallantry in action during his time in Vietnam.

The article reads as follows:

“While serving as a rifleman with troop B, 1st squadron of the 1st armored cavalry, Chamberlain’s unit was attacked near Tam Ky by an enemy force of unknown size. Viet Cong entrenched in bunkers poured automatic weapons fire at the men, wounding several.

Chamberlain jumped from the armored vehicle in which he was riding, gave first aid to the wounded, then charged one of the bunkers, killing it’s occupants. He was wounded in the process. When his ammunition ran out, he returned to the vehicle and dismantled an M-60 machine gun.

He used the machine gun to attack a second bunker, but was wounded again by an enemy grenade. Undaunted, he went on to destroy a third bunker.”

Those acts earned Chamberlain the two medals mentioned as well as his sergeant stripes. Had I known this story, I would no doubt have thanked Chamberlain for his actions, bravery and service during our short chats.

Unfortunately, due to health issues possibly caused by his time in Vietnam, I will probably never get to have another face to face talk with him. However, I think there’s a good chance he will read this. So Gary, thank you for your sacrifice both then and now.

It’s true real super heroes don’t wear capes. Some unselfishly carry trash bags on the side of the road.