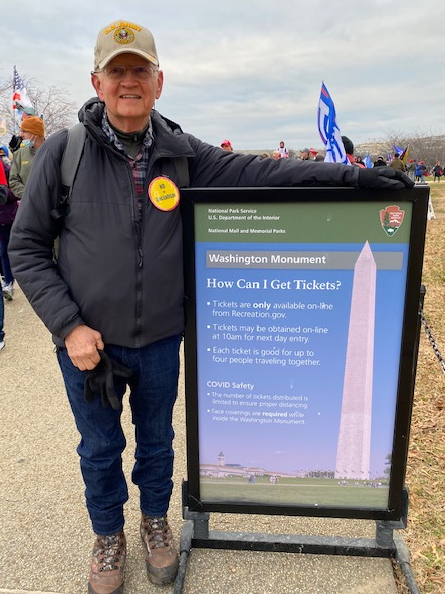 Clay County resident and noted conservative, James “Jim” Johnson was among a crowd of initially “peaceful protesters” supporting President Trump at one of two rallies held in Washington, D.C. Jan. 6.

He had no way of foreseeing the violent outcome of the day’s events. Initially Johnson was at the monument listening to the president’s speech then he moved on to the Capitol building where mayhem took over, violence ensued and people were killed. Johnson is quick to point out he does not condone the violence that unfolded in the Capitol.

That is not why he travelled to Washington, D.C. on the same day the Senate would formally certify Joe Biden as the nation’s next president. Despite no official proof of widespread voter fraud, Johnson believes otherwise. “I wanted to show my support for the president and express my belief that widespread voter fraud had taken place,” Johnson said. “I understand that President Trump is a polarizing figure, there are times when he is his own worst enemy. That said, I believe that most of his policies benefited the vast majority of American people.”

When asked if he was skeptical about the possibility of the rally turning violent, Johnson said no. “It never crossed my mind.” Johnson left the first rally at the Washington Momument/Ellipse before the president finished his speech and moved on to the Capitol building area.

“About a fourth of the crowd was also beginning to leave,” he said. “By time I got down to the section of the Capitol where I observed the events, there was already a pushing match between the Capitol Police and some members of the crowd. “It was here that I got my first whiff of tear gas plus a strange smell that may have been marijuana. I heard this same report from someone else. I also heard some of the people there cursing the police and witnessed the police using what appeared to be plastic/rubber bully clubs to push back the crowd,” Johnson continued.

“These things, along with others, a person on top of a tower with a bullhorn urging the crowd to push forward into the fray, and an attack on at least one other side of the Capitol, led me to believe that the assault on the Capitol was preplanned. These were not the peaceful Trump supporters I encountered at the Washington Monument.”

Here’s Johnson’s response to other questions:

Could you see what was happening when rioters approached the steps and began to break into the Capitol?

“I was about as close as you could get to the Capitol building itself, but behind the police barricade, without actually stepping onto it. Yes, I could see others making their way up the steps and scaffolding. From my observation point, about 35-50 yards away from the Capitol entrance, I never saw anyone enter the building. As I was leaving, about 3:30 p.m. I heard someone say that others had entered the building. Again, the overwhelming majority of people, the 99 percent-plus were behind the barricades and non-participants in the attack.”

If you could see what was happening, what was your initial reaction and were you concerned for your own safety?

I was surprised at the actions of the crowd and shocked that some people were actually confronting/ assaulting police officers. No, I never was concerned for my safety, I was behind all this mess.“

How long did you observe what was going on before the crowd was dispersed? Was it dispersed by police or rally attendees leaving on their own?

When I left, about 3:30 p.m., the assault on the Capitol was still ongoing.

What can our country’s citizens and elected representatives do to reconcile our political differences and move on as one nation in the future?

“We need to return to God and people of faith need to pray for a peaceful and equitable resolution to the nation’s problems. We need to reacquaint ourselves with the tenens of the Constitution and the attributes that made the American experiment of a self governing people unique in world history. We need to start listening to one another in a civil manner, actually taking time to hear what the other side has to say, debating the issues, and hopefully finding common ground. I believe a lot of conservatives feel frustrated at what they see as a two tier justice system, a bias media, and now the tech companies censoring and shutting down free speech. Unless these and other issues are adequately addressed, I fear for the future of America. “John Adams, signer of the Declaration of Independence and America’s second president said: ‘Our Constitution was made only for a moral and religious People. It is wholly inadequate to the government of any other.’”