Say Something launched in school

Cutting. Bullying. School shootings and suicide. These are just some of the ways American youth hurt themselves or someone else. While Clay County is not immune to these issues, a new solution is now available to help reduce the likelihood of these dangers for local students.

The Say Something Anonymous Reporting System, or SS-ARS, offers a means of reporting anything a student does or says which may be considered threatening to himself or someone else.

Students from grade five and up, along with staff, have been taught to recognize potential warning signs that could indicate someone is a danger. SS-ARS encourages students, teachers or other school staff to say something to a trusted adult or use the anonymous reporting system, which has been downloaded as a free app on their phones.

Clay County Schools Sheriff’s Resource Officer Melissa Mariano trained students and staff about the app. She said the Sandy Hook Promise Say Something Anonymous Reporting system was created by some of the parents of the children who lost their lives in the Sandy Hook Elementary School shooting that happened on Dec. 14, 2012 in Newtown, Conn.  Students from both Hayesville Middle and Hayesville High Schools received the training. 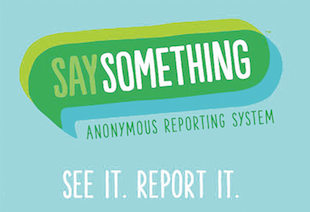 “A critical component in preventing school shootings, bullying, suicides and other forms of violence and self-harm to our students,” Mariano said. “They were taught the three steps that could make a difference in looking out for each other every day in their school and community.”

Step 1 is look for warning signs and threats. Step 2 is when you observe a warning sign or threat, act immediately and take it seriously. For step 3, say something, tell a trusted adult or use the Say Something Anonymous Reporting System.

“Students were taught how to download the Say Something App or to use the website or hotline to send in a tip or ask for help,” she said. “Schools are safe, but they are not immune from acts of violence and this training was to empower the student body to Say Something when they see a warning sign.”

“Eighty-seven percent of active school shooters planned their attacks in advance and often gave verbal or social signs that they were planning to harm others,” she said. “Thirty-seven percent threats of violence were sent electronically before a violent act occurred. By teaching our student body the three simple steps of how to look for warning signs and threats, act immediately and take it serious and to say something we can become better at reducing violence and creating a healthier and safer school system for our students.”

Here is how the Say Something Anonymous Reporting System works:

1. After observing or hearing anything scary or disturbing, especially on social media, it is reported anonymously through SS-ARS, a 24-hour, seven days a week, to a crisis center, mobile app, or website. Whomever is reporting must identify the associated school.

2. The submitted tip is triaged by certified crisis center counselors who collect information about the tip.

3. The tip is delivered to the impacted school, as well as the 911 center or law enforcement, if needed.

4. The tip is assessed as life safety or non-life safety and intervention is done for at-risk individuals.  Local law enforcement is involved, when necessary.

5. Once all actions have been done, the school closes out the tip.

A letter sent to guardians of Clay County students explained. In order to create a sustainable, coordinated effort to improve school safety, community-wide programs must be instituted. Besides students, everyone from teachers, parents, and law enforcement to health professionals and elected officials must be involved in the efforts.

North Carolina State School Superintendent Mark Johnson said Say Something Anonymous Reporting System is being made available to all public middle and high school students across North Carolina. “Students will be able to download the app and, importantly, be able to report any kind of behavior they find troubling,” he said.

North Carolina is the second state to implement the program after Pennsylvania, thanks to the Sandy Hook Promise. In addition to the app, the group provides crisis center counselor training to help evaluate tips and contact authorities.

The program meets the school safety requirement mandated by North Carolina General Statute 115C-105.51. “One of the most important pieces of the puzzle of school safety that we are very excited to be able to add, starting next year, is the student voice,” Johnson said. “Students have a way to easily let us know any concerns.”

To report anonymous tips, use the mobile app which is available for Apple of Android devices, call 1-844-5-SAYNOW or submit a tip online at: www.saysomething.net.