Superintendent Cole is on the job 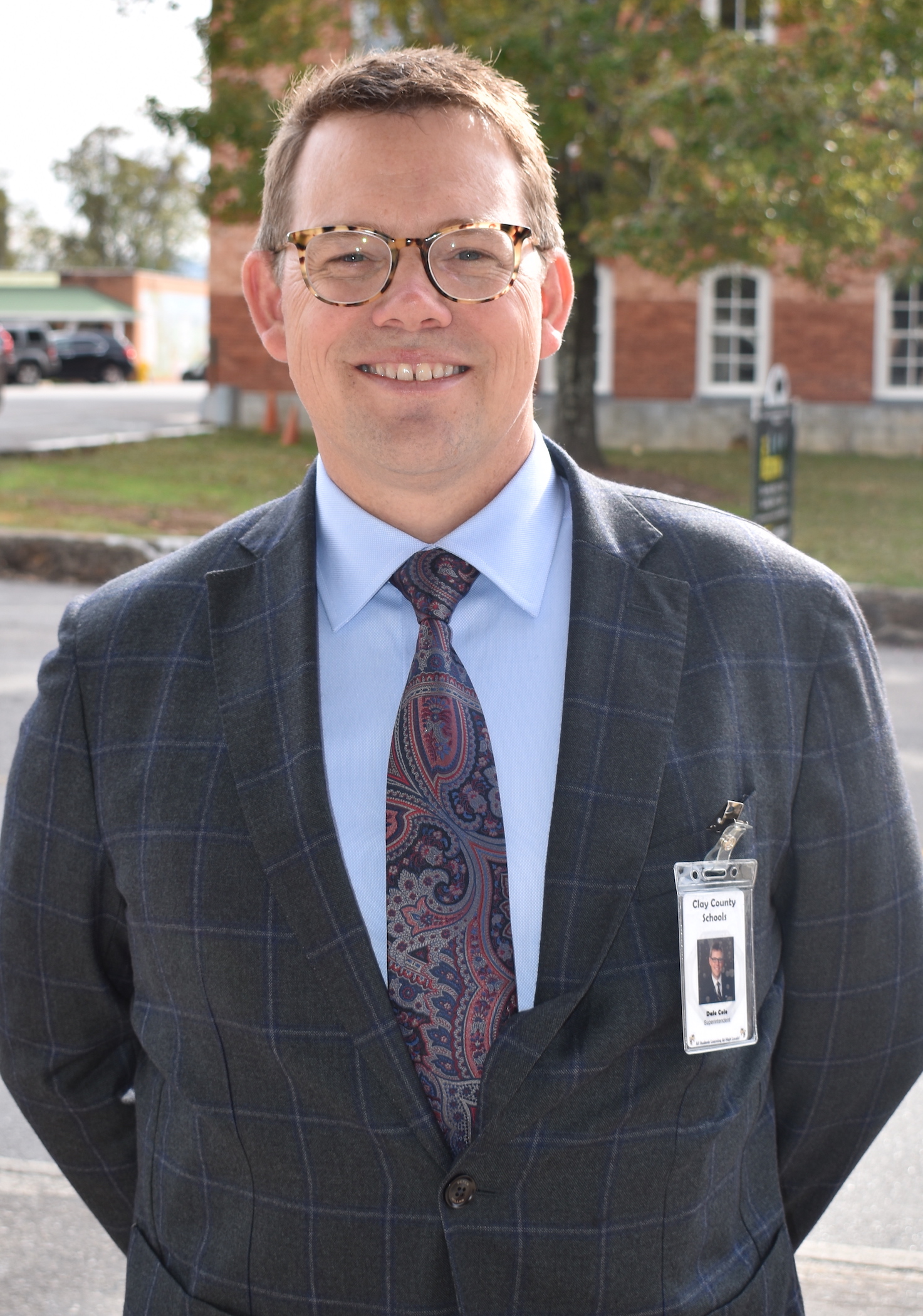 He has only officially been on the job since Friday, Nov. 1, but Clay County Schools Superintendent Dale Cole sat down for an interview Monday, Nov. 4. He shared his insights about being a school administrator and educator, as well as a coach.

When asked about the best and most challenging things for a school administrator, he replied. “Seeing the kids succeed is the best thing. Being superintendent for a small school system, you see the kids every day,” he explained. “To be an educator, you’re in it to help people accomplish things. To know policies, to think them through and help solve issues.”

Finding qualified teachers is the biggest challenge for rural schools, he said. “The number of teachers being produced in North Carolina has decreased by 41 percent,” he said. “It’s hard to find qualified teachers for math, science and exceptional children. Thirteen years ago, we had tons of applicants. It is an exhausting job now with students coming to school with more mental health issues the school is not equipped to handle.” He said larger school districts sometimes offer sign-on bonusses or more pay so smaller schools are often losing teachers to bigger schools. “The more rural you are, it can be harder to keep teachers unless local government makes it a priority,” he continued. “We have to look at what we can do as a community.”

Even though his start date was November 1, Cole was on-site as a consultant the entire week before. Prior to that, he took leave from his Hyde County Schools job and shadowed interim superintendent Scotty Penland for several days.

The Eastern Carolina University alumnus holds a bachelor of science degree in English education and high school English, in addition to a master’s degree in school administration.

In year 24 as an educator, Cole began his teaching career as an English teacher for grades 9, 10 and 11. “I liked teaching writing and I am an American lit guy. Mark Twain is my favorite,” he laughed. “I never taught 12th grade because I am not a fan of Brit literature.”

During his last year as principal, Cole was named 2013 Wells Fargo North Carolina Principal of the Year, an honor which took him to various meetings in Raleigh and other places to be a sort of emissary for schools. He served on several committees working closely with the N.C. Senate and House, as well as then Governor Pat McCrory.

A subsequent role was as a Department of Public Instruction transformation coach for low-performing schools. Most recently, he was director of instruction for Hyde County Schools in Swan Quarter, N.C., the smallest school district in the state, with about 1,300 students. There are 600 kids in two schools, including a Pre-k through grade 12 school on Ocraoke Island, where he usually spent one week of each month.

“Something I am pretty proud of,” he smiled. “They trickled down from an A school to a C over five years. They have been working hard and received the national title of Blue Ribbon School of Distinction for North Carolina.”

As a longtime football and baseball coach, Cole believes sports are beneficial to kids. “If done well, students learn a tremendous amount about leadership, citizenship and being on a team. I think it is good for kids to play multiple sports because that is character-building,” he said. “So many businesses are team-based, even internationally, and we need to know how to help our team through hard times, as well as good times. Learn not to fear failure. So many lessons transfer to college and career readiness from sports. It matters how you represent your community.”

Cole said other extra-curricular activities help. “For any kind of enrichment activity that is team-based, I look for three things. First, how is it used? Second, does it teach leadership or citizenship? Three, is there a competitive component? Every student at Hayesville High School should be involved in something outside of the classroom.”

He would like to figure out what obstacles are keeping students from participating in extra-curricular activities. “How can we change our priorities to make them well-rounded?” he asked. “Community is a priority, but time and money are the two most valuable things to most.”

As for substance use, Cole said he has seen the same issues on the coast. “There was seasonal work and poverty,” he explained. “Fishermen could pick up the drugs on their boats and bring them in. When people feel a lack of hope, they are more susceptible. For teens, they believe they are bullet-proof and they don’t think they can be hurt.” He believes the best way to fight it for students is peer pressure. “Peer pressure always is and will be the most effective thing, whether your peers are your friends or your family, depending on your relationship with family,” he said. “Less and less kids have that family structure and they need to be part of a group.”

His own family will continue to reside in eastern North Carolina, probably until next summer. In the meantime, he and his wife, Kim, have been looking at homes in Clay County. His oldest daughter, Darah, just began her high school senior year and her final year swimming. His daughter, Delta, is on the high school swim team with her sister for the first time this year. Son, Ty, is also a swimmer and the entire family enjoys boating and other watersports.

Cole said his wife hopes to find a state job in this area so she can remain a state employee. She is an environmental inspector for underground fuel storage tanks.