Great shooters keep shooting. That fact of basketball life propelled Hayesville's Kolbe Ashe on both ends of the floor Friday night as the Yellow Jackets (11-2) punched out previously unbeaten, 10th-ranked Andrews (10-1) in a thrilling 54-49 Smoky Mountain Conference slugfest at The Hive Friday night. 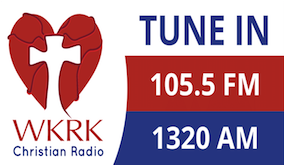 On defense, Ashe diligently dogged missile launcher Kabe Ellis after Andrews' brilliant bomber canned three lobs from behind the arc in the first quarter. Ashe's relentless attention paid dividends over the final three quarters as Ellis made just three of his last 10 shots – one when Ashe had to switch off to guard someone else.

Ellis was still brilliant with 19 points, seven rebounds and two steals, but he had to work for everything he got. Teammate Tucker Holloway had a similar experience. He finished with 13 points, most of his markers coming the hard way as Hayesville's Hayden and Blake McClure, Brady Shook, Mark Cothren, Paul White and Kyle Lunsford swarmed him nearly every time Andrews' speedy slasher drove the lane.

More than once, Holloway and at least one defender ended up sprawled on the floor.

"These teams have played each other like this since they were little," Hayesville coach Mike Cottrell said. "The whole team did a good job of grinding it out, and helping each other get some good shots. And we they played good defense. They're learning to rely on each other," Cottrell said. "I'm proud of them." 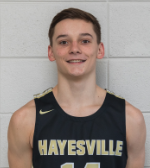 Cottrell praised Ashe for having "a great night defensively." Kolbe's offense was also praiseworthy Ashe hurt Andrews with bold drives to the basket and pinpoint passing while trying to find the net from three-point land. Like all great shooters, Ashe kept looking for opportunities to dial L for long distance. And, as is so often the case with greats, his homerun shot materialized when Hayesville needed it most. Ashe's three-pointer from the corner with 3:11 remaining gave Hayesville a lead it wouldn't relinquish. The super soph then insured the lead by snaring a defensive rebound :12 later.

Ashe's timely three-pointer wasn't his first big moment. He repeatedly slammed the door on Andrews rallies. In the first quarter, when Andrews pulled ahead by one with a 9-2 spurt, Ashe scored on a drive to put Hayesville up 15-14. Hayesville promptly went on a tear, outscoring Andrews 11-2 over the next 5:31 to produce a 27-23 halftime lead.

McTaggert was truly a force during Hayesville's surge. McT racked up 11 first-quarter points and five more early in the second act on a sweet selection of shots – baseline jumpers, drives, a one-hand floater, and a pair of treys.

The Wildcats scored twice in the first :52 of the second half to go up 28-27 and were going for a third bucket when Andrews Landon White was whistled for an offensive foul for backing into a Yellow Jacket. While Andrews coach Frank Maennle raved, Blake McClure returned the lead to Hayesville with a bucket at the other end.

When Andrews tied the game with a free throw, Ashe again came to the rescue. Displaying nerves of a cat burglar, Ashe zipped a perfect no-look pass to Shook under the basket to put Hayesville up 31-29. The Yellow Jackets stayed in the driver's seat and led 36-31 after three periods.

Hayesville widened that lead to 41-31 by opening the fourth with a steal by Hayden McClure, a three-point bomb by Jake McTaggert and a bold drive to the bucket by Cothren.

Of course, Andrews came back. The Wildcats eased ahead 44-43 when Bryson Holloway drained a three ball with 3:22 remaining. Ashe's aforementioned three from the corner gave Hayesville a lead it never relinquished. 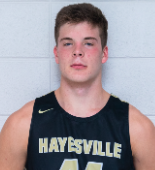 But Andrews refused to go away. Tucker Holloway cut the lead to 51-49 with a dashing drive down the lane that resulted in three bodies on the floor, a whistle, and Holloway being awarded a charity toss with :30 left to play. The free throw bounced off the rim (Andrews 15th missed free throw in 22 tries), Hayesville's Jake McTaggert rebounded and rifled an outlet to Cothren, who tossed a textbook pass to Lunsford for an easy lay-up — his fifth point in the fourth quarter.

Cothren's free throw at :13 gave Hayesville the margin of victory and added an exclamation point to Mark's 10-rebound, 7-point, 2-assist performance off the bench.

"Mark Cothren and freshman Kyle Lunsford came in and really gave us a boost," Cottrell said.

McTaggert came up big with the game on the line. Jake scored seven points in the fourth, to finish with a game-high 23 points, seven rebounds and a pair of blocks. Big

Jake's constant movement and spirited play in and around the lane was a big factor in foul trouble that plagued Andrews' front liners.

The win was definitely a big one — perhaps the biggest of the year — but Cottrell is keeping things in perspective. "I think it's a big win, not a championship-deciding win, but a big one. Any win against a ranked team is a big one," Cottrell said. "I'm proud of them, but we still have a long way to go."

Another big game awaits the Yellow Jackets as they will travel to Cherokee Tuesday, Jan.14.