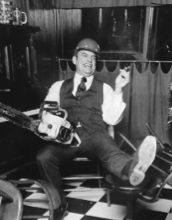 “Cal” Eckhardt attended St. Lawrence University and New Orleans Seminary, but graduated with a bachelor’s degree in aeronautical engi- neering from Emory Riddle University. After completing his degree, he worked for Singer Kearfott Company in Asheville, N.C. He was a gifted musician, a skilled piano player and an all-out entertainer. He was known in Asheville as “Cal Ecker the Piano Wrecker” and played many years at the Half Shell Inn On The Plaza. In addi- tion, he was an avid model airplane builder and flyer which led him to own and

A private family memorial service will be held at a later date.

Arrangements are entrust- ed to the Cochran Funeral Home of Hiawassee: www. cochranfuneralhomes.com.