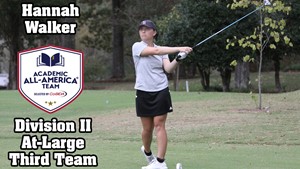 Walker is the 25th Young Harris student-athlete named to a prestigious Academic All-America® team since 2011 and the first women's golfer.

Walker, who is a senior from Cumming, Georgia, had a 4.00 GPA as an environmental science major. Walker, who also minored in biology and chemistry, earned the Peach Belt Conference Elite 15 Award for the second consecutive year. Walker, who is the only senior student-athlete with a perfect 4.0 GPA, has been named to the Peach Belt Women's Golf All-Academic Team, the PBC Presidential Honor Roll, and an All-America Scholar by the WGCA three times each. She also earned D2 ADA Academic Achievement Award last year. Walker received the Luke Rushton '42 Scholar-Athlete Award this spring. It is awarded to the senior student-athlete with the highest cumulative grade-point average.

Walker became only the third golfer in conference history to be named to a All-PBC team four times, joining University of North Carolina at Pembroke's Shauna Walor (2009-13) and University of Montevallo's Elaine Wood (2013-17) with that distinction, after being named to the second team in 2020. The 2017 PBC Freshman of the Year led the Mountain Lions and was 10th in the Peach Belt with a 77.42 stroke average in 12 rounds. Walker recorded a top-10 finish at the Jekyll O'Lantern Intercollegiate in October and she was also named the league's Golfer of the Week in February.