As of Tuesday, Feb. 9 the MaxPreps rankings have the Hayesville Yellow Jackets in the No. 2 slot in the 1A class behind Lincoln Charter. Across all classes, the Jackets find themselves in the top 30. Hayesville used a 60-46 win over Murphy Friday, Feb. 5 and a 56-51 comeback victory over Robbinsville Saturday, Feb. 6 to stay among the state’s top teams. 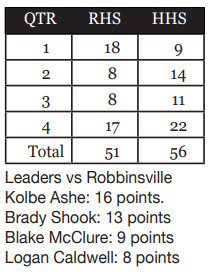 The Jackets jumped out to an early lead against Murphy with a 9-0 run to start the game. Before the quarter ended, the Bulldogs were able to cut the lead to 9-4. Murphy fought back in the second quarter with 13 points while the Jackets managed 11. The total was enough to keep Hayesville in the lead 20-17 at the half.

Scoring continued the upward trend for both teams in the third quarter. The Bulldogs’ 15 points in the stanza was impressive, but the Jackets managed to extend their lead with 19 of their own. Hayesville saved the best for last and used 21 fourth quarter points to wrap up the 60-46 victory over their rival.

In a quick turn around, the Jackets were back in The Hive the following night to face Robbinsville in a game that had been postponed earlier in the week due to weather. The Black Knights started the game with hot shooting hands and put up 18 points in the first quarter to grab an 18-9 lead. Momentum swung to Hayesville’s side of the floor in the second. The Jackets methodically cut into Robbinsville’s lead and by the break, the Black Knight’s lead stood at 26-23. 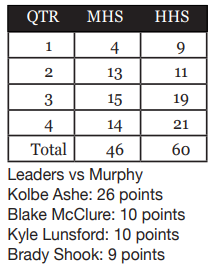 The visitors managed to keep finding the bottom of the bucket in the third quarter, but Hayesville stayed within striking distance with timely buckets of their own. With one quarter to play, the teams were knotted at 34-34. In the fourth, the fight was on. Both teams battled for rebounds, steals and good looks at the basket. Robbinsville was on a mission to take down the Smoky Mountain Conference leaders and 17 points was a good try. However, it wasn’t good enough as the Jackets put 22 points on the board to secure the 56-51 and keep the undefeated record intact.

Hayesville travels to Cherokee Friday, Feb. 12 for a big showdown with the Braves. Next for the team will be their final home game of the regular season Tuesday, Feb. 16 as they host Rosman. Fans can watch the Jackets attempt to close in on a conference championship on the “Clay County Schools” YouTube channel both nights at 8 p.m.