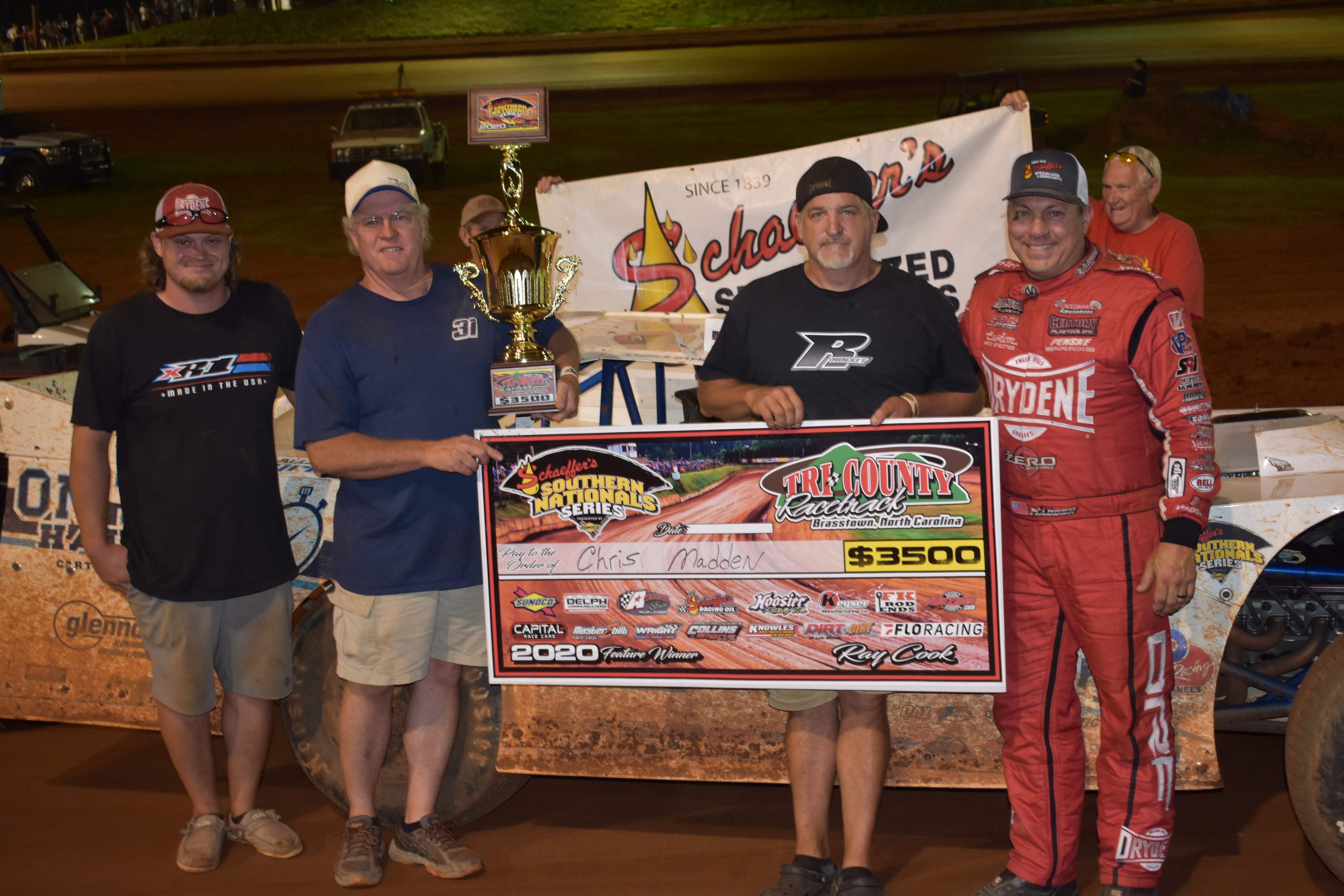 Madden earned $3,500 for his 27th career victory on the tour while driving the Millwood Motorsports Rocket Chassis .

After a false start on the first attempt, the second attempted start would be a go. Fast qualifier and pole sitter Ross Bailes leading lap one with Brandon Overton taking second from David Payne before the field completed the first circuit. Madden and Tyler Millwood rounded out the top five in the early going.

Madden would work past Payne for third on lap three as Overton would pressure Bailes for the lead. Warne’s Danny Ledford brought out the first caution on lap four when the center of his right-rear wheel broke. The failure was the latest in a long list of bad luck for Ledford this season.

As Bailes, Madden, and Overton began to work lapped traffic, the trifecta would race three-wide for the lead. Bailes was able to maintain a slight advantage until disaster struck on lap 15.

Bailes tangled with a slower car he was attempting to put a lap down in turn three. The contact resulted in Bailes’ car coming to rest on the deck of the lap car, ending his hopes of a win. Donald McIntosh was also caught up in the wreck, ending his night after running sixth.

This turn of events put Madden in the lead, with Overton now second, Payne third, Millwood fourth, and 12th place starting Brent Dixon fifth. On the restart, 14th starter Jake Knowles would get a great launch and make his way by Dixon into the top five on lap 16.

Madden, Overton, and Payne slowly distanced themselves from fourth place Millwood by lap twenty. Madden would maintain a comfortable lead, while Payne appeared to close a bit on Overton as the final caution of the race appeared on lap 27 for a turn one spin by Murphy’s Jamie Oliver.

On the restart, Madden held the lead with Overton closing in on top runner with two circuits remaining. Overton’s last-ditch effort fell short and  Madden scored the victory. Overton settled for second and Payne crossed the stripe as the highest finishing local driver in third. Millwood and Knowles rounded out the top five.

Dirt racing fans can visit Tri County Race Track Friday, July 31 to cheer on their favorite drivers. Along with the regular divisions, the Super Late Models will return to Brasstown to battle for $1,500. Gates open at 5 p.m. with racing getting underway at 7:30 p.m.